To produce foie gras, ducks are force fed massive quantities of food through a metal pipe to expand their livers to over 12 times their natural size. The ducks are slaughtered right at the point where many of them begin to die from the process.
‍
In 2004, APRL was instrumental in passing legislation in California to ban the sale and production of foie gras starting in 2012. The San Diego City Council commended APRL for its work on this issue. APRL also successfully worked to pass resolutions supporting the ban in San Francisco, Solana Beach, West Hollywood and Berkeley.

In 2019, APRL worked with Voters for Animal Rights to ban the sale of foie gras in New York City, effective November 2022. APRL is now working to defend the law in court after foie gras producers sued to block enforcement.

APRL has also obtained court orders against restaurants in California stopping them from violating the ban. 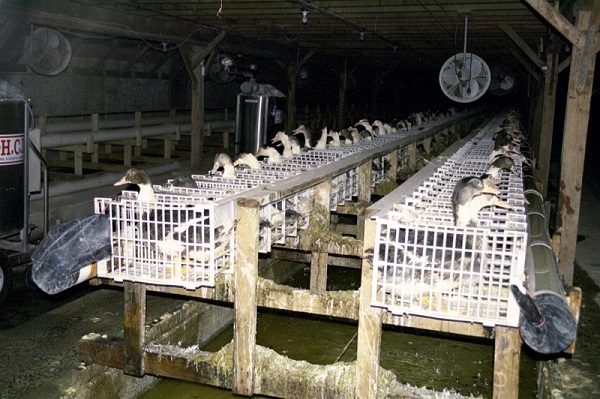 Above: the inside of one of Hudson Valley Foie Gras' two locations in Sullivan County, NY, which has falsely claimed not to have used these types of cages. APRL has repeatedly exposed the cruelty at HVFG's two facilities and La Belle Poultry in the same county--which are the only force feeding operations in the U.S.--as seen in this video narrated by Wendie Malick and this video narrated by Sir Roger Moore.